Since the government shutdown ended, a friend and I were able to go to a bird watching trip at the Lee Metcalf National Wildlife Refuge on Saturday morning.

There were a plethora of ducks in the ponds, as you may be able to see from the above photo, so the bird watching included a little education about ducks, including us giving a “presentation” on a duck species and the sounds that species makes! We had the Bufflehead duck for our “presentation” to the rest of the group:

We also walked around on a path and looked through a scope at deer, pheasants, killdeer, a Great Blue Heron, and of course, ducks.

Obviously, from the ridiculous number of times that I have said “ducks,” I do not know much about them. However, a walk in the mountains on a Saturday morning can’t be beat. Just check out this scenery! 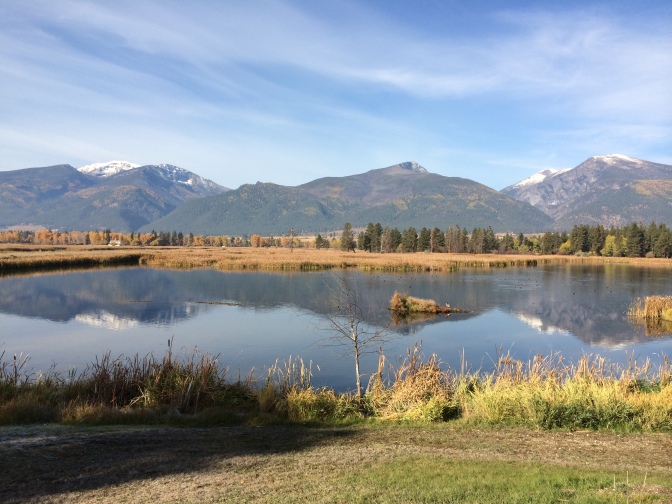 Before the snow comes barreling in, I would like to visit this wildlife refuge again and take a different route to see more wildlife. As USFWS ranger Bob says of the paths, “build it and they will come”: he used this metaphor to show that the US Fish and Wildlife Service built the infrastructure and the animals will come if patrons look carefully. He also reminded the group that if you are quiet in the wilderness, you are likely to see more animals.

One thing I learned from this bird watching trip, since I had never been on one, was to pay attention to what ducks or birds in water are doing. If there is a shift in energy or a lot of moment, you should look up in the sky because another animal, like a bald eagle, may be near.

The Metcalf National Wildlife Refuge has a twitter and a tumblr page, so check them out!

One thought on “Bird Watching at the Metcalf National Wildlife Refuge”