This week, I will be highlighting three infographics relating to – you guessed it! – endangered species.

The first is one by the World Wildlife Federation (WWF) on species of Sea Turtles. This infographic is also in celebration of World Sea Turtle Day, June 16th. The infographic explains different species of sea turtles around the world, and includes their endangerment status, location, as well as states the reason for their endangerment: bycatch (“the incidental capture of non-target species when fishing”), illegal trade and direct consumption, habitat loss and climate change. Also, the infographic provides information on how to help support sea turtles. Click through the picture below for the full infographic.

Lastly, MNN created another infographic which shows the “Top 20 countries with the most endangered species”; Ecuador and the United States take the lead with about 2,000 and 1,200 species each (respectively), all the way to South Africa, with about 400 endangered species. The infographic provides a map showing the placement around the world of the more than 10,000 species that are endangered. Click through to see the full chart! 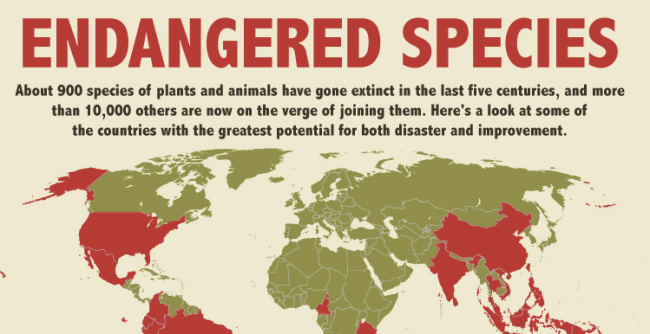 This weeks “The Best of the Rest” includes pieces of other endangered species information!

Stay tuned for the spotlight post for this week on Friday!