Anyone who follows me here knows I’m a huge national parks fan. I’ve been to countless parks and natural areas all over the U.S. and Canada, planning vacations around them in our family motor home every summer, camping in BLM lands across the street, staying with family/friends a few hours away to visit a park for the day, flying camping gear across the country to camp in a park, or driving hours and hours round trip from my apartment when I lived in the West.

In December, I took a trip to Southern California, so of course Joshua Tree was on my list, again. I was then planning on driving to the Grand Canyon on the next part of the trip. But while I was on vacation, the government shutdown. My first thought? Anger.

I was extremely angry that I planned a vacation around the parks and there was the potential of the parks being shut down, all because of funding for something I’m not going to mention, but you can read about here.

But thankfully, they remained open, and we headed into Joshua Tree National Park on December 23, 2018, the second day of the shutdown. We were warned that the visitor center would be closed, toilet paper might not be stocked, and there would be no rangers — but the gates would be open.

Driving in, no one was there to take our money, and we drove right in, along with the hundreds of other cars of tourists visiting Joshua Tree that day. We found toilet paper in the open bathrooms, and the trails, campgrounds, and parking lots were open. Since it was the first day, people weren’t being that stupid — yet.

We did see some people walking off-trail (which is a usual occurrence in Joshua Tree, as it is just a desert and people can pretty much walk anywhere if not policed) and saw one person flying a drone, but for the most part, the trash cans weren’t overflowing and the toilets were clean. 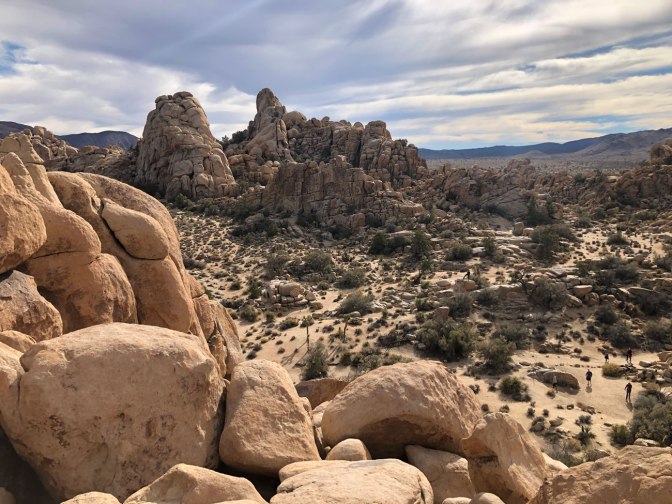 Two long weeks later, whether people are taking advantage of “free” national parks are not, this is not the case. Joshua Tree has closed campgrounds because “pit toilets have reached capacity” (um, gross), and people are performing other hazardous acts in the park — like driving off-road, wandering into the wilderness alone, and literally STEALING JOSHUA TREES, which are extremely fragile and are under threat from climate change (and their habitat could disappear in the park altogether by 2100).

Volunteers in the area, dubbed “toilet paper angels,” are going into the park every day and emptying trash cans, restocking bathrooms, and picking up human waste on park grounds.

Because of all this destruction, and despite these volunteer efforts, the National Parks Service has now had to dip into entrance fee funds (an unprecedented and perhaps illegal move, which will take money away from the parks) to start cleaning up the parks themselves.

Yesterday, I visited Gateway National Recreation Area in New Jersey to do a beach cleanup and saw much of the same — no access bathrooms, and people walking wherever they pleased.

As a “parks” person, I have mixed feelings about visiting these majestic, amazing places in the national parks system. A good chunk of my vacation was planned around taking my girlfriend to see Joshua Tree and the Grand Canyon — two iconic parks that I would have obviously paid to go see, shutdown or no shutdown. Being a wild keeper and steward of the Earth, I would have picked up trash if I saw any (we didn’t contribute to any trash in either park), but for people to use and abuse “our” natural places like this really upsets me.

But should I have even visited in the first place and contributed to the masses of people coming in and out of the park, even if I left no trace? Should the parks even be open in the first place to prevent this kind of destruction? Would this lead to people illegally entering the parks anyway?

And on the entrance fees… it really bothers me that we’re missing out on so much money for the parks just because of a shutdown. Everyone visiting the parks during this time should be donating their entrance fees to the National Park Conservation Association or the conservation association affiliated with the park you’re visiting — like Joshua Tree National Park Association or the Grand Canyon Conservancy. This way, you can be sure your money is going back to preserving the park for future generations.

And if you’re close to a park, join a cleanup effort! I headed out to the closest NPS site I could find and picked up 23.5 pounds of trash on the beach in just 30 minutes.

The shutdown isn’t going to end any time soon, so if you’re heading to a park, please be mindful of yourself and your waste. Whatever you pack in, please pack out (and pack out MORE if you happen to see SAFE trash on your way back). We only get one Earth, and one national park system, so let’s keep it clean.

*editor’s note: An earlier version of this post said there was no one at Gateway Recreation area to collect fees, but fees aren’t collected between Labor Day and Memorial Day.