Sure, I’ve provided facts and figures in other blog posts before, outlining how to save water by taking a shorter shower, reusing dishwater, and growing plants more native to your area to prevent the egregious overuse of watering plants that need a lot of water to survive in desert or dry areas (I’m looking at you, Los Angeles).

Jay Famiglietti, senior water scientist at the NASA Jet Propulsion Laboratory/Caltech and a professor of Earth system science at UC Irvine, recently wrote an op-ed for the LA Times stressing that California only has one year of water left. “Will you ration now?” he asks in the headline. He explains that California, which has been struggling with a massive drought the past 4 years, has about a year left of water in reservoirs, and the groundwater backup supply is dwindling, too. 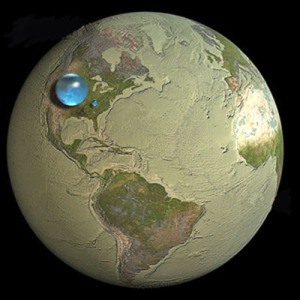 Let’s back up a bit. The world has way less fresh water to use than you may think. Even though the earth is 71% water, 96.5% is trapped in the oceans. That leaves 4.5% freshwater, but only a fraction of that percentage is actually fresh water that we can use, considering some of it is in the Arctic as sea ice and glaciers.

Check out the globe diagram, courtesy of the USGS. The big sphere over the middle of the US is all the water, in volume, on Earth. The middle sphere represents the freshwater on the Earth, including that which cannot be used because it is in glaciers. The last small dot, which is almost impossible to see, is the fresh water in the lakes and rivers on the planet, as well as aquifers, which is the water that we use every day (and most often).

California, along with the rest of the Western United States, is struggling with drought and aquifer depletion due to the lack of snowpack, which provides water to lakes, rivers, streams and underground aquifers. The warm winter temperatures in recent years cause this lack of winter precipitation. For more about aquifer depletion, check out this article by National Geographic.

Check out the graphs below from the National Climactic Data Center.. and check out all that red. Global temperatures are on the rise, and that is shown in this map from the LA Times:

The biggest problem? Obviously, we all need water to survive. And we’re really bad at conserving it (from National Geographic):

Unfortunately, humans have proved to be inefficient water users. (The average hamburger takes 2,400 liters, or 630 gallons, of water to produce, and many water-intensive crops, such as cotton, are grown in arid regions.)

According to the United Nations, water use has grown at more than twice the rate of population increase in the last century. By 2025, an estimated 1.8 billion people will live in areas plagued by water scarcity, with two-thirds of the world’s population living in water-stressed regions as a result of use, growth, and climate change.

Honestly, I don’t think people understand (or want to understand) the severity of this crisis. Not only do we use water in our everyday lives for showering, drinking, and preparing food. But everything else we do, including growing and processing food, making clothing, and producing other goods takes thousands, even million gallons of water a day.

According to the US Environmental Protection Agency (EPA), American families use 300 gallons of water per day. 300 gallons! Most of this occurs in the house, with the largest slice of the pie coming from the toilet. Next comes the washing machine, shower, and faucets. Leaks also waste water. To change these things, we can buy low-flush toilets, fix leaks, and turn off the water when brushing our teeth. In the United States as a whole, we use the most water for thermoelectric power and irrigation, which account for 70% of our water usage together.

I’m not perfect. I wear jeans. I eat the occasional hamburger. Obviously, I shower. But we don’t need to eat beef every day, buy new jeans every season, and take 30-minute showers. Let’s eat more veggies, wear jeans until they wear out, and shave outside the shower to save water.

In conclusion, Famiglietti puts it perfectly:

The public must take ownership of this issue. This crisis belongs to all of us — not just to a handful of decision-makers. Water is our most important, commonly owned resource, but the public remains detached from discussions and decisions.

It’s not just a problem in the United States either. Water scarcity and desertification plagues communities all over the world.

It doesn’t sound like you’d be doing much, but if everyone tries to make a difference, the effect will be far-reaching. Calculate your water footprint to see where you can make the most difference in your water usage. If we run out of water, we’re done. So let’s change that.