There as been a lot of good news on the plastic bag ban front in the past couple of months. Luckily, the bans that started in California have caused a ripple effect on the rest of the United States. Entire states are beginning to legislate bag taxes, and ordinary citizens are continuing to give alternate ideas to the public in regards to using plastic bags. Here are the best stories I have found all week!

1. The Beginnings of Bag Tax in Hawaii

Just a few years after this debate began about plastic bag bans and taxes, the entire state of Hawaii is diving in head first. If the bill to tax paper and plastic bags makes its way through legislation, Hawaii will be the first whole state to enact this kind of pro-environment bill. Another good part of this tax is that sixty to seventy percent of the fees from the ban would go toward watershed protection and restoration. The bill has taken four years to make it to this point in the legislation, and Stuart Coleman of the Surfrider Foundation explains that “this is kind of win-win for everybody. We’ve got businesses behind us. We’ve got government agencies. We’ve got environmental groups and just a whole wide array of school groups and citizens and such. It’s very inspiring to see everything come together.” It would be nice to see the East coast come together like this, but we are significantly behind the West coast in environmental legislation.

That brings me to the second great article I found about the continuation and expansion of the West coast ban in San Francisco. San Fran has banned bags in supermarkets and pharmacies since 2007, but this new legislation would expand the ban to citywide retailers. Not only will the stores have to charge 10 cents for each paper bag, but avoiding the law will make the retailers subject to fines. The article states that plastic bags will still be used for dry cleaning, “doggy bags” from restaurants, and bulk candy. Some small business owners took up concerns with the Department of the Environment staff and elected officials in the area, saying that this ban may bring down business. Quite uncharacteristically of them, the officials are told to explain the implications of the ban to these small business owners and are preaching awareness and education about the ban. Way to go, government!

3. The Story of Stuff: “Take THAT, Plastic Bags!” Podcast 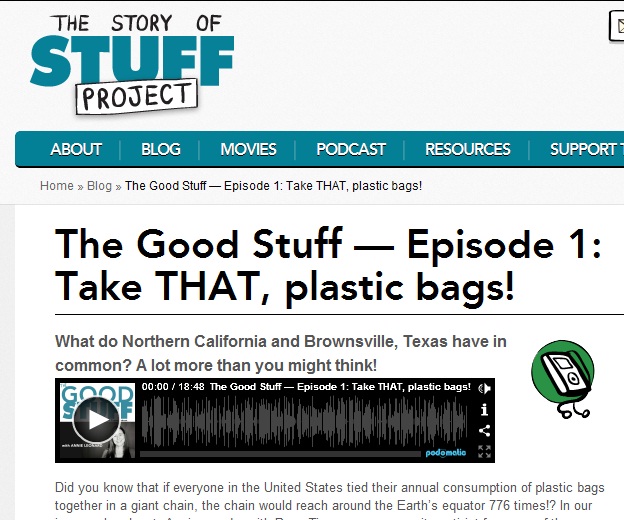 Last but certainly not least is a new podcast series by the Story of Stuff people. In this podcast, Annie Leonard, narrator of all SOS videos, talks to Andy Keller in the first part of the podcast about the dangers of plastic bags, which include littering the landscape, collecting in the ocean, clogging drains, and many other problems that I have no doubt preached at you guys before. Anyway, Annie talks to Keller about how his visit to a landfill filled with plastic bags blowing around and accumulating in piles, and how much he was disgusted by the experience. Keller explains in the podcast his beliefs about recycling: basically that putting something in the bin doesn’t mean it gets recycled. After this remark, Annie goes on to tell a story about how she followed a plastic waste barge to Asia for “recycling.” Upon arriving in Asia, she found that the plastic bag waste was either thrown away with the rest of the garbage or burned, both of which aren’t ideal solutions. At the end of the interview, Keller preached that it has been stressful, but he is leaving the world better than he found it. Click through the picture to listen the podcast!

All in all, I am glad to see that more and more people are changing their viewpoints on plastic bag bans/taxes. It is the small efforts of towns and cities across the globe that are slowly changing the way Americans are seeing the environment, and I’m glad that people are embracing environmental conservation. It is everyone’s planet, but what happens when it is destroyed by only a few? If we turn it around now, the world will be a better place.